Conservationist of the Year

Each year the District honors those who best work to conserve the environment and work to protect soil health and water quality of Monroe County with the Conservationist of the year award. Scroll below to learn more about past recipients.

Our 2018 Conservationist of the year is none other than Maureen Leupold. Maureen is a volunteer and currently serves as the Director at-large on the Monroe County SWCD board. She has been an asset to the district for donating her time to educational programs including Conservation Field Days and Envirothon. She has also taught educational workshops for students in preparation for the event

and multiple times in Genesee County on topics such as acid rain, wetland ecology and biodiversity. Maureen previously had a career as a highly regarded science teacher and biology professor for 25 years, earning two NYS Chancellors awards for teaching and scholarship at the college level. Upon her retirement in 2015, she was the Director of Science at Genesee Community College. In addition to devoting time to environmental education she also volunteers for the District’s Tree and Shrub Program; where she and her husband Steve assist with preparing and packing thousands of trees for distribution to residents. The District is honored to present Maureen Leupold with the 2018 Conservationist of the Year Award!

The District awarded 2017 Conservationist of the Year Award to the Director of the Monroe County Parks Department and Seneca Park Zoo, Lawrence Staub, Jr. After receiving a Bachelor’s Degree in Asian studies from the University of Albany, State University of New York, Lawrence has enjoyed a professional career in government for 31 years. Larry has had numerous accomplishments throughout his carrier including, but not limited to, the construction of the Lamberton Conservatory, establishment of multiple dog parks, improving and overseeing the Rochester Lilac Festival and creating programs and events for residents and families in our parks.

He has supported the Monroe County Soil and Water Conservation District’s Envirothon & Conservation Field Days programs over the last decade by providing his staff and the County’s Ellison Park in the Town of Penfield to host these events each year. Larry has also showed great commitment toward the conservation and preservation of soil and water resources by partnering with the District to implement conservation projects for water quality improvement and invasive species management and mitigation. Under Larry’s leadership, the Monroe County Parks Department has committed to mitigating the effects of Emerald Ash Borer on forests and riparian areas by planting thousands of trees within four of our County Parks.

The District is honored to present Larry Staub, Jr with the 2017 Conservationist of the Year Award. Congratulations, Larry.

The District awarded David Lindsay with the Conservationists of the Year award on August 12, 2017 at this year’s annual Celebrate Agriculture Dinner. Dave graduated from Penfield High School and went on to study Civil Engineering at Rochester Institute of Technology. He has spent nearly 25 years working on highway transportation and bridge projects, stormwater management system design and various environmental projects. Dave started his career in the private sector where he obtained his Professional Engineering License. He later moved on to where he currently serves as the Commissioner of Public Works/Superintendent of Highways, Stormwater Management Officer and Floodplain Administrator for the town of Chili.

Dave has partnered with the Soil and Water Conservation District to help complete conservation projects to protect natural resources. With Dave’s leadership, the Town of Chili was able to successfully complete 3 large-scale streambank stabilization projects on Black Creek with many more in the making. He has greatly supported the Monroe County Soil and Water Conservation District’s Stormwater Management Program, where he is on the Executive Committee of the Stormwater Coalition of Monroe County. 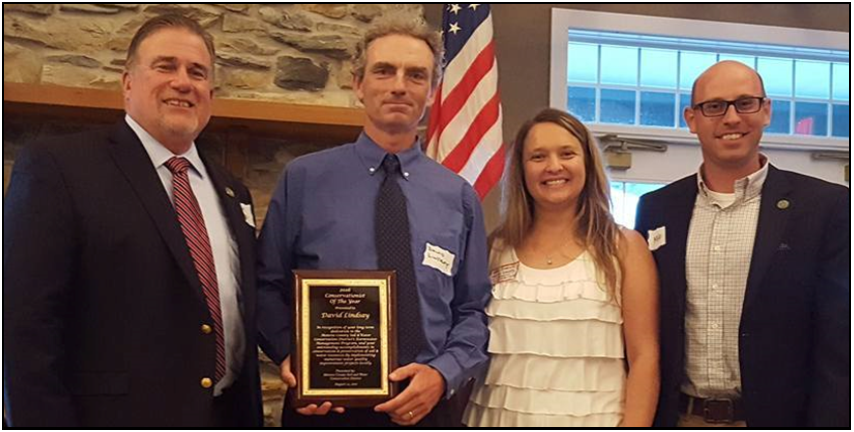