The Water Quality Improvement Program (WQIP) is a New York State grant program is designed to provide funding to help protect the water resources of the state. Projects funded under WQIP across the state have ranged from upgrading wastewater treatment plants to removing dams and restoring aquatic ecosystems. Below you can find the projects that the Monroe County Soil & Water District has completed or working on thanks to funding from WQIP. 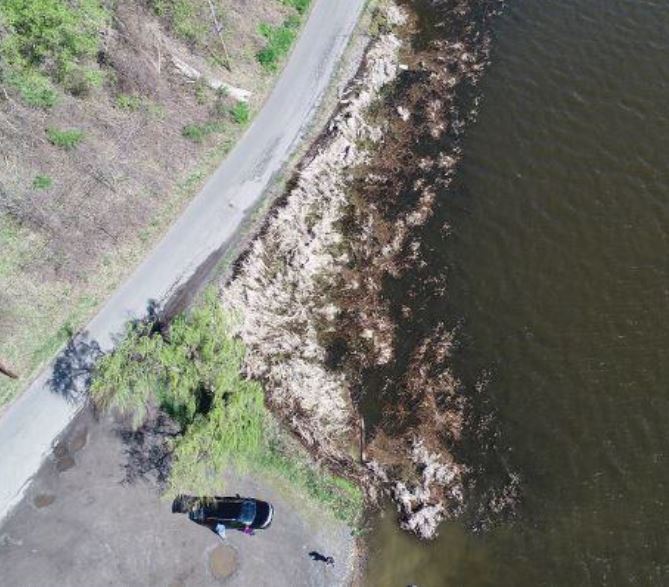 Irondequoit Bay before the shoreline was restored. Look at how little soil is left between the road and the shore

The newly altered shoreline. The inlets will provide wildlife habitat and fishing access. Note how far the road is now from the shore.

The District collaborated with the Monroe County Parks Department to restore approximately 360 feet of eroded shoreline along Irondequoit Bay, with the aim to increase local flood resiliency and improve water quality. Bay Front South – a road that runs parallel to the bay and provides local residents with recreational access, has recently seen its shoreline erode significantly. If left unchecked, continued erosion along the road would eventually see it becoming submerged beneath the bay, prevent local boating and fishing access, and destroy the ecological habitat of the shore. We sought to correct this by stabilizing the shoreline through the implementation of bioengineering and nature-based stabilization techniques.

The shoreline project was completed in three sections, with each section altering the underwater shore bottom with a series of potholes, channels, and mounds. By creating a varied topography, we can help establish wetland vegetation, and as the wetland plants grow they will physically hold the soil in place, reduce the impact of waves, and provide new wildlife habitat. Then, densely packed coir logs and large stones were placed back on land to prevent soil from being moved by wind or water currents. Further, since the stones we are using are quite large, they can provide fishing access as well. Farther back, we removed invasive vegetation and replaced it with a series of native, water tolerant trees and shrubs. With a series of new vegetation and physical changes, the shoreline and Bay Front South are now more protected than they ever have been.

Monroe County Soil and Water Conservation District is restoring and stabilizing a severely eroding 1,337-foot section of Black Creek located within the Village of Churchville. This section of Black Creek flows past several homes who use the creek – and continued erosion threatens to not only erode the yard space but also possibly flood these properties.

The district has developed a two-step solution to deal with this issue.  First, a riparian buffer will be created along the edge of the stream, behind the limits of the main stream restoration. The riparian buffer will consist of native tree and shrub species and limit the amount of nutrients entering Black Creek while also helping stabilize the shoreline.

Second, in order to help protect the restored streambank and riparian buffer from flooding, a flood-relief channel will be created in the publicly owned land from Monroe County Parks and Recreation along the inner bend of  an eroding section of Black Creek. Flow will begin to divert through the channel at the calculated flow rates for a two-year storm event. The channel will have the capacity to re-route flow rates for up to a 100-year storm event. The  flood relief channel will also help to increase climate resiliency within the Village of Churchville by diverting floods that in the future will be stronger than those today. Also, it will reduce the risk of structural failure for many homeowners and community infrastructure along the outer bend of the reach of the project. According to STEPL calculations, the proposed project will reduce sediment loads by 1,799.0 tons/year for sediment, biochemical oxygen demand by 126,143.2 lb/year, phosphorus 5,942.7 lb/year, and nitrogen by 1,646.1 lb/year.

The District and River Research and Design Inc. will also work to educate local professionals and municipal officials at the proposed project site to provide design and implementation training for future streambank restoration practices. Public educational opportunities will be held by the Black Creek Watershed Coalition and Monroe County SWCD at local fairs and festivals as well as at BCWC monthly meetings.

This project is still in the pre-construction phase.

Monroe County, in partnership with the Stormwater Coalition & the SWCD, & with WQIP funding support from NYS DEC, is developing a county-wide Stormwater Master Plan to assess the condition of local waterways, prioritize retrofit projects, & model expected improvements to water quality. The project is comprised of three high priority retrofit/stream restoration projects from the plan that would significantly reduce pollutant loads to local impaired waterbodies. The project would also demonstrate the multiple benefits of stormwater retrofits & build support among decision makers & residents to further advance plan implementation.

The first two projects focus on the Shipbuilders Creek Watershed. In 2008, the status of the creek was downgraded to impaired, largely due to rapid residential and commercial development, making this a waterway of high concern. Planned is a restoration of a 700’ section of stream at the Thomas HS Campus in Webster. Here the creek shores have been armored and straightened with vegetation removed – causing significant erosion and destroying the ecology. The project would consist of restoring a 100’ wide buffer of native vegetation, installing biotechnical streambank erosion controls & bioretention, & creating stable, benched back banks, meanders, and riffles/pools. The School District is committed to being an active partner on the project & students would be involved in planting, maintaining, & monitoring. As of now this project is still in the planning phase.

Black Creek, a major tributary to the Genesee River, was selected as the other watershed for the final project because it is an impaired waterbody and the Genesee is a state priority. At Union Station Park in Chili, a 1,200’ section of stream has been restored with a 30’ buffer of native vegetation. This project has been completed. 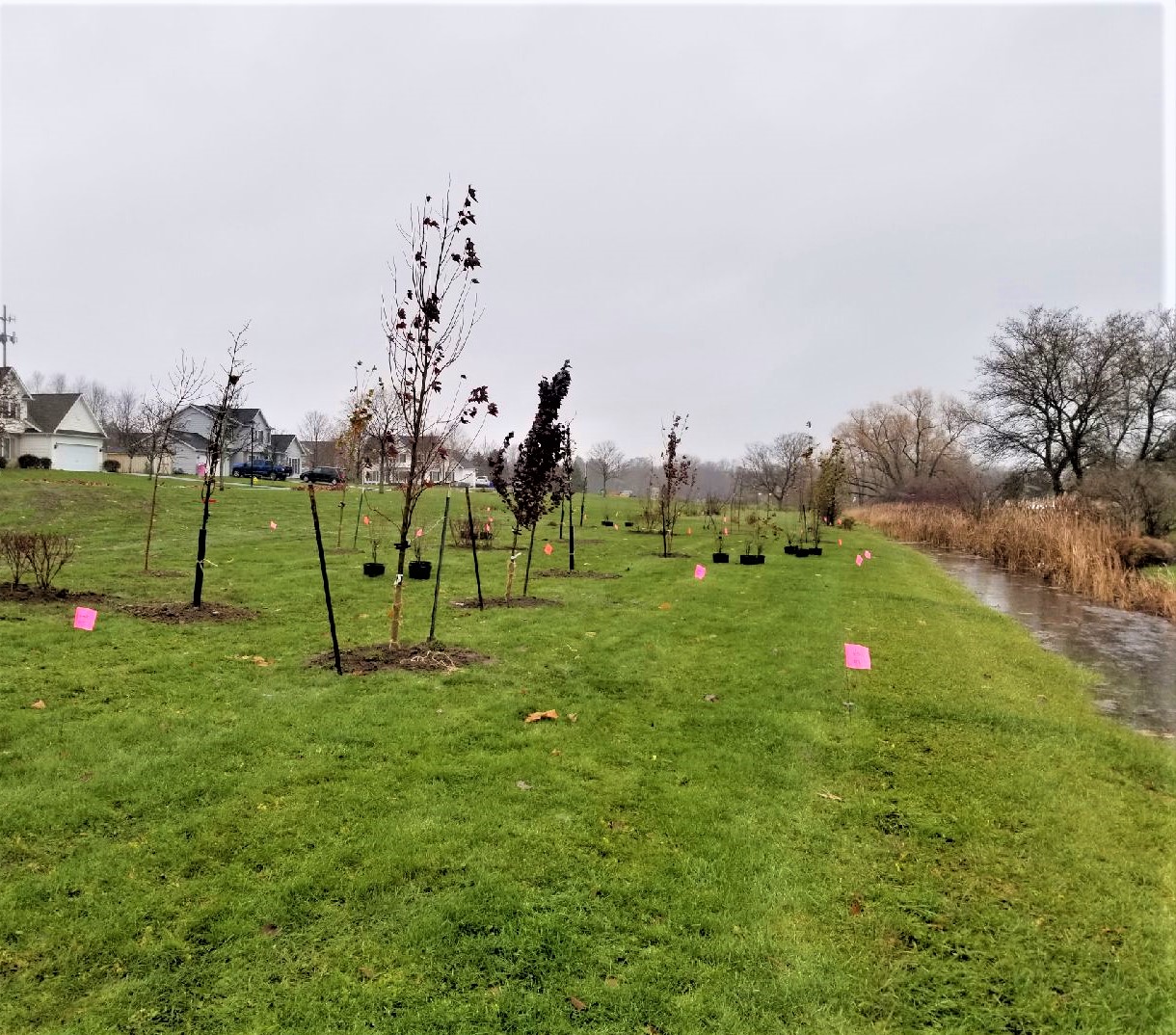 Trees planted along Black Creek in Union Station Park in Chili. These trees will prevent pollutants and excessive nutrients from entering the creek, and in time they will prevent erosion!